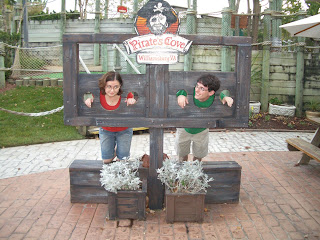 My husband likes different. And I can't blame him. I wouldn't want a plain old boring black pair of gloves and scarf either. And that's mostly what is out there for men. But this past winter was freezing, and even winters before I couldn't bear seeing him go out without a scarf and gloves. So we picked out this fun (yet subtle) Sticks and Stones yarn by Caron Simply Soft Paints.

I started with the scarf, the basic Ribbed scarf pattern from Deb Stoller's book. I opted to use size 13 US needles instead to give it a kind of lacy openwork kind of feel and made it plenty long for him to wrap around several times.

Then he asked me to make gloves. His scarf was only my second project, so I said, wait and we'll see. Everyone I had ever talked to said to stick to mittens or fingerless gloves. Gloves sounded horrible! Well, here's a little thing about me. I don't tend to stick to what people recommend and I always like a challenge. So after knitting the booties (see previous post), I was ready to try something new. I decided to try the Ken pattern by Berroco.

Since the project turned out to be a surprising success despite all the warnings I heeded not, I named them the Dread Pirate Gloves.

I did have a few snags. The first few rounds on DPNs is a bear. There was no mention of how to add yarn when you move on to the next finger. I finally found a how-to somewhere online, but it didn't warn about it creating holes between the fingers. I found that if you thread the yarn through back and forth with a needle a few times before knitting there really wouldn’t be much of a gap. Don’t know if that’s the best way to do it, but they look good! And I learned it is much better to use the person's actual hand (if available) instead of the measurements in the pattern. The second glove is little wonky (one of his favorite words) because I failed to do this.

All in all, I enjoyed taking on the challenge of "the dreaded gloves," and Ben is pleased with his new gloves (and has been wearing his scarf all winter). I look forward to scaling more knitting mountains. :-)

Oh, a funny little bit! I finished all of this with two skeins. I really thought I wasn't going to have enough for the second glove so I went all over to find another skein. My Jo-Ann's was out of it, and I ended up driving 45 minutes to get a third skein. I never needed it. In fact, I had this much of the second skein left:

So, for next winter, I think a matching hat?
Posted by Lidi Di at 2:26 PM No comments:

Lidi Di
I am a bookworm, musician, and a crafter. Or, to put it more kindly, a DIYer. But then that sounds weird. My love for crafting began at a young age when I would spend weekends with my Gran making things and later when my mom taught me to sew and a little bit of crochet and cross stitch for 4-H. I am married to a true MacGuyver and I love watching those gears turn. He is a kind-hearted man and one of the greatest gifts I’ll ever receive. I work as an Administrative Assistant at a wonderful missionary agency. And all of the above activities along with some devotionals and prayer help me unwind and gain perspective. Hubby and I both prefer to make rather than spend. Which is nice since our budget is small and we like to be unique. Herein lies my DIY chronicles.